The father of all strong beers

Our brewing history begins with this beer. And the history of strong beer in Bavaria – it was the Paulaner monks, who invented this bottom-fermenting double bock. We have been brewing the Salvator for over 375 years – always according to the original recipe, which was continuously refined over the years: The head is the colour of caramel and the beer is chestnut brown, combined with a seductive flavour of chocolate to give a pleasing intensity on the palate. Hereto comes the finest Munich malt, rounded off by a light note of hops in the background. Often imitated but never duplicated: The father of all double bock beers, of which the names always end in “-ator”!

18,3% original wort and 7,9% alcohol. Salvator is not only our most traditional beer, it is also the strongest. It was originally brewed by the Paulaner monks as a nutritional substitute for their own consumption during Lent to compensate for their sometimes demanding fasting ritual. The high quality and exceptionally good taste not only kept morale high among the monks, but also inspired young and old to new heights. Despite this, the monks were officially obliged to serve the Salvator only after the Regent Prince Karl Theodor had tried and was convinced and immediately approved a sample in 1780. Following this ancient tradition of the Paulaner monks, we celebrate the first barrel of strong beer to be opened at the Nockherberg in the springtime. Of course, even today, the first sample beer is reserved for the Minister President of Bavaria. The political elite attends the festivities, despite the biting satirical impersonations of prominent politicians, which are a tradition there. This special beer makes it worthwhile for them. It is served true to style in Keferloher ceramic mugs or “Steins”, and tastes malty with a fine balance of sweetness and fruity flavours, making this Ur-Paulaner speciality ideal to enjoy with equally intense dishes, for example duck with damson sauce. 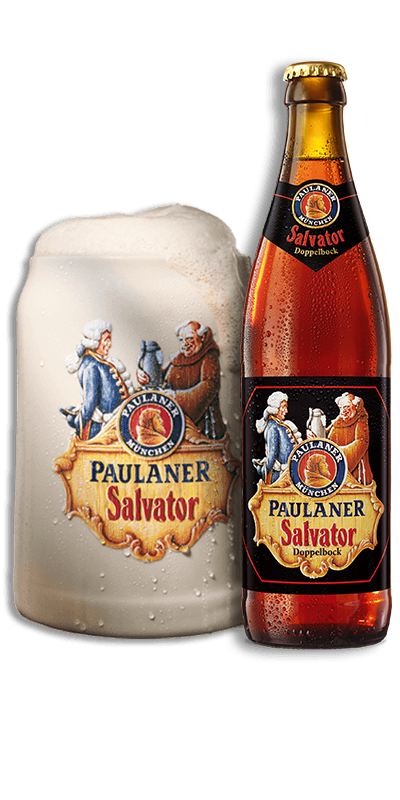 Our Salvator is brewed with the finest quality ingredients.